Ian Banksmith graduated with a BA in Fine Art in Hobart, 1980. He made an interstate move to Melbourne in 1994 and now resides and works in Ashburton, Melbourne. He has had numerous solo and group exhibitions and his works are held in public and private collections in Australia, London and New York City.

The opportunities to travel widely has allowed Banksmith to study specific artworks and refresh his views and methods. His artworks spanning 30+ years demonstrate his technical ability using different mediums and show an interconnection and cohesive resolution within his works. Artistic endeavours throughout this period have seen him innovate and develop new possibilities and skills with acrylic, enamel, oil and watercolour on canvas and paper. Biomorphic abstraction, surrealistic, expressionistic, minimalist and calligraphic/ linear methods have been employed that manifest into the present incarnation, namely ‘sculptural reliefs’.

In 2008, after staging a thirty-year retrospective, Banksmith’s intention became clear - to combine elements from his early period and merge these with previously developed styles to form a relief. It incorporated flattened organic shapes, bold colour and the hard edge style of his early work. Banksmith’s current and unique timber 3-D artwork asks the question, is it painting or sculpture? 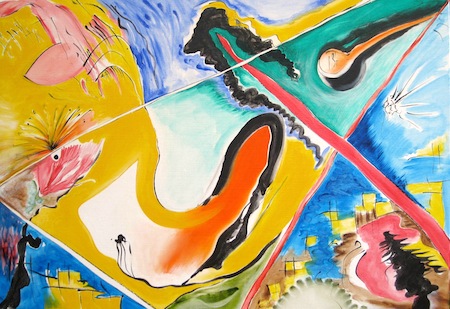