As the gallery filled prior to the opening speeches, people wandered happily around the exhibits (89 entries by 48 entrants), and commented on how well this year's Annual Exhibition looked, so many good works and such diversity of creative approaches, in this lovely light and airy gallery.

Our Annual Exhibition strives for excellence in contemporary art practice, with diverse subjects and media. With so many high quality works, it is hard to know where to start and end, so I will mention just a few of those I particularly fancied, not counting the prize winners: Cheryle Bannon's painterly mixed media and acrylic collages, Betty Collier's skilful alabaster sculpture, Laurie Collins' quirky steel sculptures, and Charlotte Kandelaars' acrylics with unusual use of colours.

The Society has a long history of having wonderful judges and many famous Australian artists for its Annual Exhibitions. Our President introduced this year's judge, Ivan Durrant, and explained that during the judging process, the judge is given a special catalogue list without the artists' names, to ensure impartiality. Ivan thanked us for inviting him to judge, and recalled earlier days of our Society as it was when Boyd, Tucker and the others were members. He also recalled Georges Mora, his first art dealer of Tolarno Galleries, and other CAS members of the time.

Ivan said he feels that it is the most generous thing to do, to create art to show other people. He stated... "To be a good painter you need to put blood on the canvas … get yourself out there!” In judging the works, Ivan said... it was “like a wine tasting but with art”, and that he chose works that show emotion, yet could not explain all of the aspects of each work that drew him to it. He awarded six prizes plus three Highly Commendeds. Robert announced each prize-winner, and invited Ivan to speak about his choices.

First Prize, total $1,949, went to Pigeon as Prisoner by George Eustice, who unfortunately was unable to be present. Ivan's comments: “A beautiful little picture. Pigeons are let out to fly. There's such sensitivity in this work. The bird's curled over head (into its breast). There are bits of colour in the bird, bits of vibrating red.”Ivan felt that the work contained a comment on holding respect for everyone in prison. This was in keeping with the artist's statement in the catalogue: George had been giving food & water to a trapped pigeon for days, before it was finally freed. 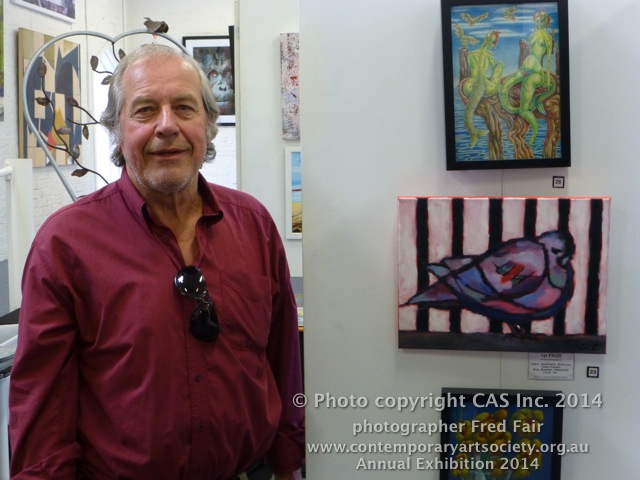 Second Prize, total $1,150, went to Four Timeline Studies by Debbie Harris Walter. Ivan's comments: “A marvellous piece”, it has three small canvases within a museum case, with references to history, and showing “an interest and preservation of small things.” In her works, Debbie explores the life of the micro world. She was surprised and delighted, and thanked Ivan and CAS. 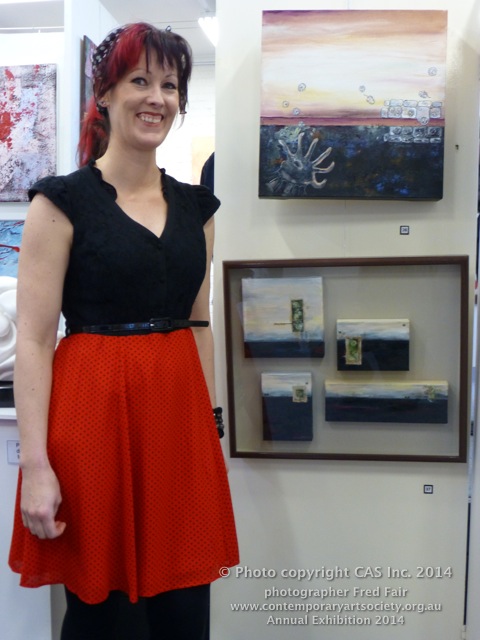 Third Prize, total $660, went to The Mechanism of Time by Mary-Lin Litchfield.Ivan's comments: “She's got wonderful balance of colour sense. (The works shows) something that's always been there till right now where humans are at peace with a beautiful world. A beautiful piece.” Mary-Lin thanked the judge, the Society, her husband Tom, and the fact that she has a new studio after a tree fell on the one she had. 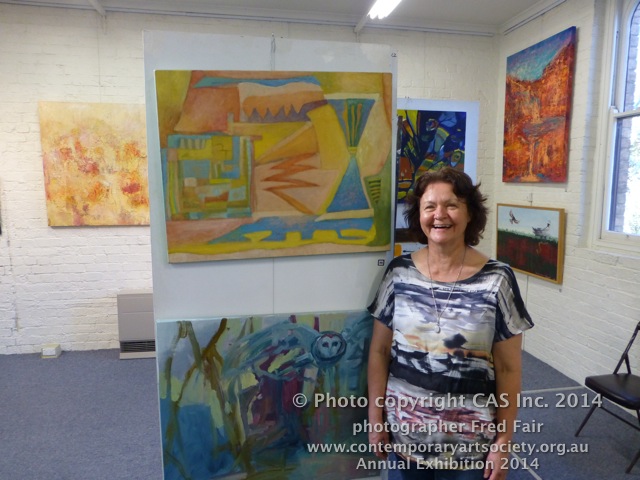 Fourth Prize, total $209, went to Finding Pathways by Jan Delaney.Ivan's comments: “Such a strong conviction in this work. Lovely delicate bits of landscape.” He said that it reminded him of Van Gogh, who loved nature so much that he would emphasis particular aspects, such as painting a shadow bright red to emphasise it. Jan thanked Ivan for the prize and his comments (which, as she said later, were “spot on”), and the CAS Committee for making it all possible. 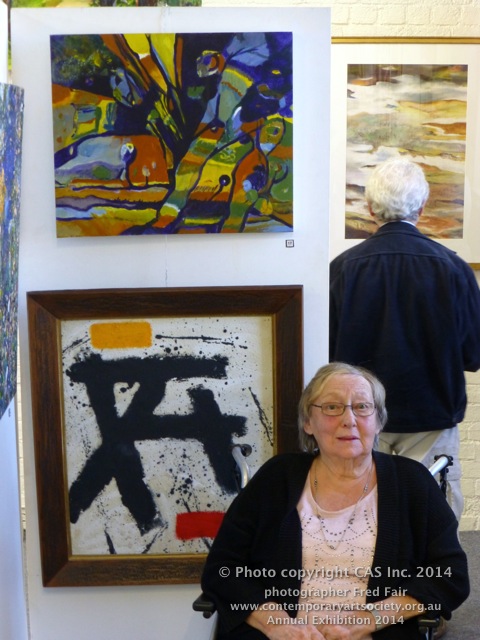 The Special Prize for Most Innovative Use of Materials, total $609, went to Forgetting and Remembering by Shelley Vincent. Ivan's comments: “A beautiful piece that tells about whatever you're about, something of your own mind. Beautiful colour. Could have won First Prize … interchangeable ...”. Shelley was thrilled, and thanked the Society and the judge. 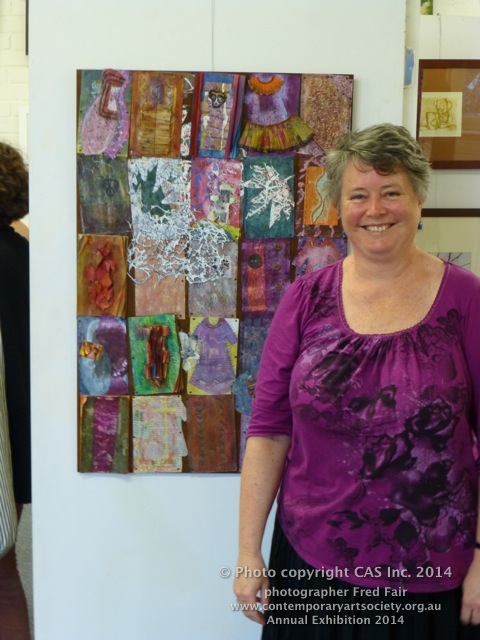 The Judge's Encouragement Award, total $600, went to Just Landed by Edit Meaklim. Ivan addressed his comments to Edit: “What I liked about this work, you've taken real steps about being very brave - taking bits of other materials to make the piece.” Edit thanked CAS and Ivan, and said that she now has more courage to be braver in her art. 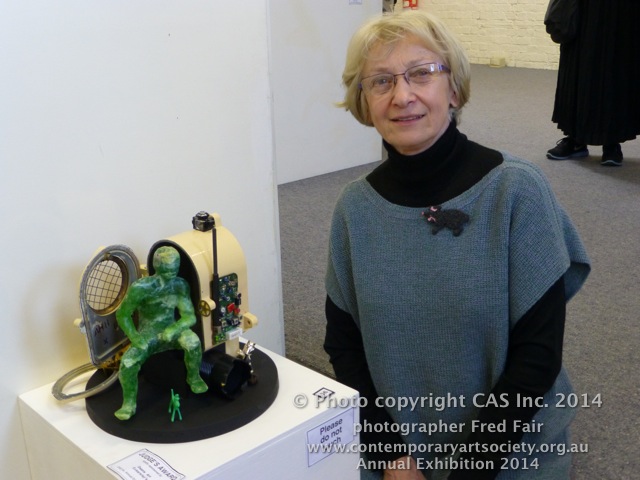 Here are the three Highly Commended works, and Ivan's comments:

Town Planning by Mandy Hopkins. “An excellent piece, it could interchange in the order of the other prizes. Something she's saying in this work: an old city, the glass of modern buildings, the symbol of a triangle, big steel constructions, a summary of how we are changing things.”

Motherhood by June Stahle. “A little collage. What I like about it - it's fantastic, the papers all work together with beautiful colours. The hands reaching out, creating a beautiful flow, almost like a Matisse, a connection and so much love between the two people.” 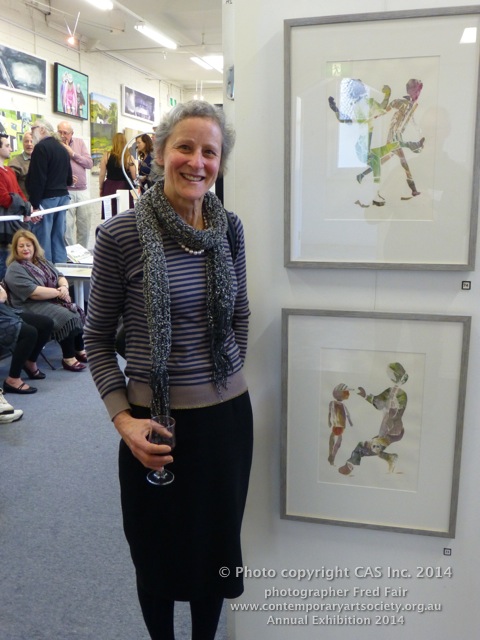 Magnificent forest, unique building, inspirational educational resource - Toolangi Forest Discovery Centre now abandoned by Ian Whitford. “Expert competency, the most of the lot. That little building sits down nicely in the land, in a place you'd like to be. Luminous colours; here's a guy who knows how to paint!” Again, he said it and the other works could have been interchangeable in the order of prizes. Ian thanked Ivan for his affinity with and acknowledgement of his painting style, and CAS and all who were responsible for putting on the show. 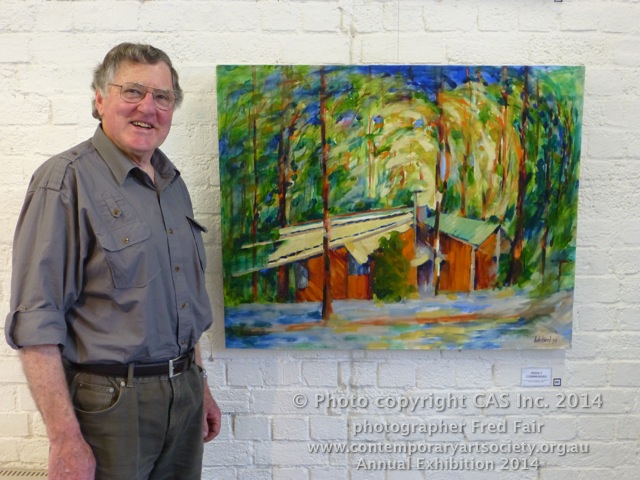 Robert invited the audience to join him in thanking Ivan for his judging, and his very engaging speech on his choices – we think he did a great job with both! Robert rounded up the official opening with: “CAS has tax deductibility” for donations and “the best compliment you can give an artist is to buy their work!”, and he also warmly invited everyone present to attend the Artists’ Floortalk on the following Sunday.

After the formal opening our guests enjoyed refreshments while engaging in lively discussion about the artworks and the judge's commentary, with several sales, including those in the popular works-on-paper folio.

Here are some photos from the most enjoyable afternoon! (Click on the image below to see all the images).