The Annual Exhibition was officially opened by the President Robert Lee, who thanked all of the CAS team for their great effort in the putting together of this very special Annual Exhibition for 2015. What a wonderful repository of artistic talent and acumen there was to be viewed this year. Work entered in the exhibition this year offered a wide variety of mediums: oil  and acrylic on both paper and canvas, mixed media, gouache and ink as well as sculptural works, textile art and printmaking. 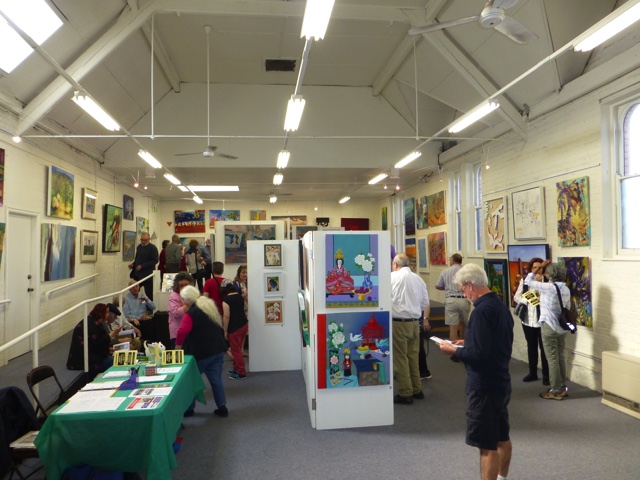 The judging of artist works was delayed until September 20 due to airline schedules and flight complications for the judge, Jon Cattapan. All paintings are judged without the judge knowing the name of the artist who has completed the work.

The winner of the Annual Exhibition 2015 was Robert Lee, the CAS president. Robert’s painting Richmond, a work associated with the city where Robert has spent most of his life, having started his working life when he was 15 years old. Robert went from working in a factory and pubs with sawdust on the floors, to visiting  Soy Latte style hipster cafes. Robert states that a lot has changed in Richmond and that a lot has changed within himself. Jon Cattapan, the exhibition judge stated that Roberts’ work Richmond, evidenced strong abstract forms with layers of mechanically imparted overlays. Richmond, depicts a city in a rush. The work is a simple composition with evidence of great command of materials, a work that reflects the speed of change occurring in Richmond at the current time.

Recipient of the second prize was the work Reflection Pool, a polished , chromed mild steel sculptural work by Paul Caccioli. Paul talked of working at the forge with the blacksmithing tools of hammer and anvil. ‘Reflection Pool’ was a work of undulating form and a truly beautiful and sensual work.

Third prize was awarded to Robyn Lusczynski for Urban Sprawl, a mixed media work on Stonehenge paper. The judge observed that this work was both strong and well attuned with spatial relationships. It was competently  held at the collapse point of abstraction and representation.

Stefan Twaine-Wood was the recipient of the fourth prize for his work A Still View, painted with acrylic on canvas. Stefan stated that this work has imagery that integrates an urban Still Life and Landscape into one view point. This work is about reflections both physically and metaphorically, reflections found when looking through a glass window in Gardenvale. The judge was attracted to the deliberate pulling together of external and internal space and stated that Stefan had convincingly handled representation of reflections. 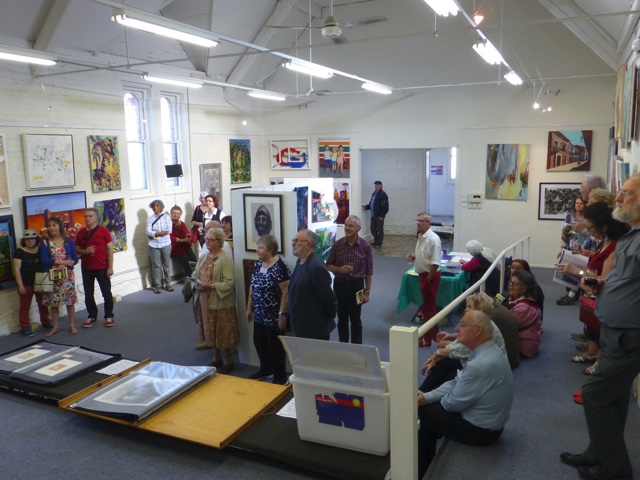 The judge’s encouragement award went to Sabina D’Antonio for Railyard, an acrylic on canvas. His comments were that this work was both fresh and lively and that the codes and numbers were an intersection where pop art meets memory.  Sabina stated that her painting was inspired by a recent visit to the Mornington Railway,  a place which allows one to journey back in time to a place when steam trains were the norm and timber carriages creaked along all over Victoria. 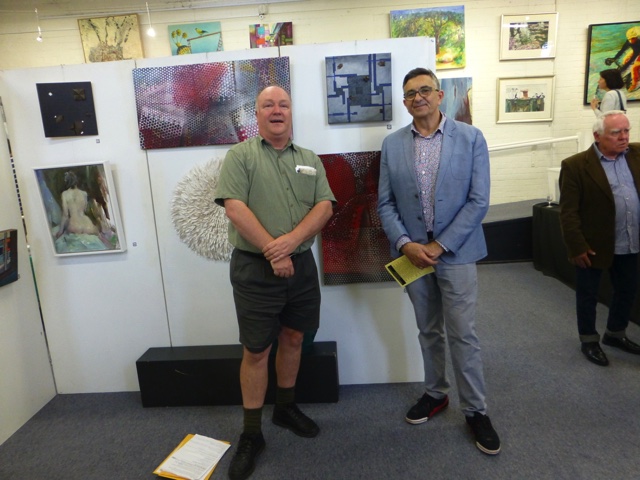 A special prize for the Innovative use of materials was awarded to Karen Foley for her work, Gridlock, a mixed media on canvas. Karen describes how her enjoyment of the origami folding paper game as a child was the inspiration for her ‘Mars Black’ series of mixed media artworks. Gridlock uses the shapes formed from the folded paper expanded on to canvas such as squares, triangles and lines, both 2D and 3D. The lines are drawn in a grid pattern from an aerial viewpoint. Some are restricted and others flow like traffic on a city map. It could be representative of a space city in the future. Karen has also drawn on her experience in Graphic Design to produce this spatial work. It is a break away from her landscape paintings and botanical linocut print series.

Highly commended artists were Amanda Carrick for her work The Lily Pond, John Kodric for his work Docklands 2 and Vida Ryan for her work Big Red.

Amanda Carrick’s work The Lily Pond was a mixed media on canvas and Amanda commented that this painting was inspired by her recent visit to Monet’s garden and the famous water lily pond.

The work of John Kodric,  Docklands 2 was inspired by the Docklands studios, built around 1999. The figure in the front of the building allows the comparison of size between the figure and building.  John has worked with contrast and colour, both of which he states dominate this painting.

Big Red by Vida Ryan is painted in oil on canvas and Vida’s comment upon this work is that is an area of deep love.

Whist many works are worthy of comment for their artistic merit it is not possible to comment on every one so some have been chosen by both their diversity and artist acumen.

Elinor Lorencev works both of which were untitled and completed in oil on canvas reflect her love of the Australian bush, in particular the colours and textures of the bark of Australia’s giant gum trees. Each work offers the viewer a feeling of gentle tranquillity in the captivating play of light and dark and the shadows evident on these trunks.

Gita Maman’s work, Valley of Tears, painted using oil on linen is a reflection of the painters inner response to the plight of the Yazidis on Mount Sinai in Iraq. Tonal in colour, this work has an organic feel and appears to be grounded in the earth. 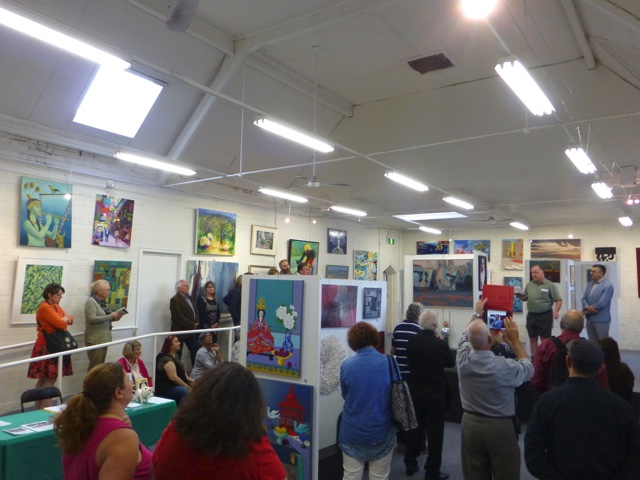 An exciting mix of 2D and 3D sculpture is to be found in the works by Ian Banksmith. Together in Perspective, combines figurative forms and a distant landscape horizon staged within window frames. Humanistic forms are shaped, positioned and attached to form a theatrical and evocative scene. These formed and painted shapes create illusions and project shadows providing an extra dimension to the work. The second sculptural work, Full Moon Conversation, was created with the intention of generating a quiet and gentle mood combined with a sensual intensity. Displaying a simplicity of form, colour and structure, the crisp shaped lines contrast with the atmospheric plywood backdrop . Silhouettes of human and natural elements morph into dramatic gestural creatures in flight.

Both paintings entered this year by Dawn Cole, ‘Spring Unveiled’ and ‘Pond Life reflected a vibrant energy with the palette of springtime. Dawn states that she is fascinated by the lifecycle of plants and has recreated both abstract and organic images.

All the artwork in the CAS Annual Exhibition 2015 may be viewed in our online Gallery HERE.

The Annual Exhibition for 2015 proved to be a lively and exciting time for CAS artists as members placed their recent works on public display for judging by well-known Australian artist John Cattapan. Congratulations to all of our members for the excellent work and effort in contributing to this memorable event in the artistic life of Melbourne. 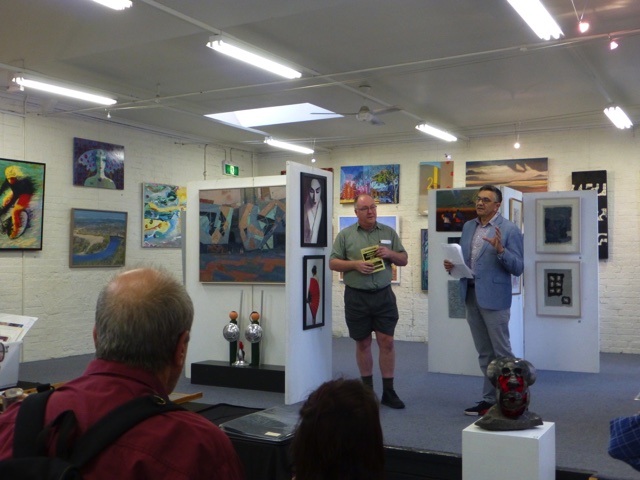