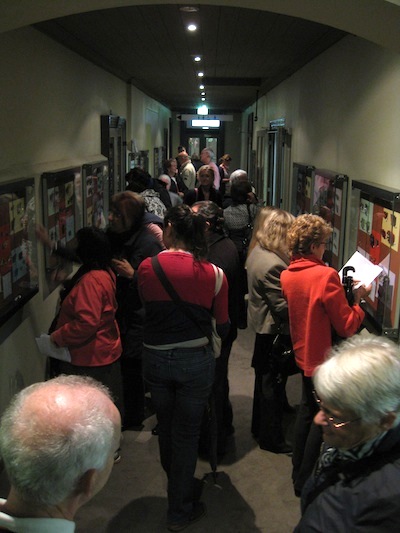 The lead up to The Brooch Show 2012 was very exciting as the entries came in, from every state and territory in Australia. As the parcels, satchels and boxes arrived, it was like getting a preview of the show in stages. It was exiting to see the variety of media used, including wood, feathers, metals, textiles, recycled objects, beads, glass, ceramics, ochres, pearls, and much more. We received a record total of 228 brooches!

Then came the hanging of the show on 1 May at Fitzroy Library, much to the fascination of library staff and clientele. We had many favorable comments and expressions of delight, particularly from library staff members, who were very helpful and supportive. One librarian said she just loves it when the Brooch Show comes here.

It took our team of four diligent “hangers” four hours to carefully put the show up. As with the unpacking of the works, it was a voyage of discovery for each of us as we gently unpacked and placed each tiny artwork in the 11 glass wall mounted display cases, as well as another display case used for extra exhibition signs and more information.

The brooches were nicely presented in the cases, displayed on coloured paper backing, which was pinned to the dark red walls of the cases. Robert Lee, our President and show coordinator, oversaw how many works should go in each case, and it all fitted perfectly!

On Saturday 5 May we had a big crowd for the opening. This was, for me, the most exciting part, the buzz and vibe when guests, public and artists all mingle over drinks and delicacies, to enjoy the show. I must say it looked great, and we had many more favorable comments and delighted expressions. Everyone enjoyed it. Robert did a short opening and welcoming speech, and received applause.

With Mother's Day just around the corner, we decided to allow purchasers at the opening to take their purchase with them, as soon as it was paid for in full. This proved to be an extra impetus to prospective purchasers, and we had lots of sales, and another lovely thing was to see the delight on the faces of the buyers as they took charge of their purchases, nicely presented to them by our smiling Treasurer, Kathe Ostermark, in elegant little black gauze gift bags, which she had very kindly personally donated to CAS to give to each purchaser. Our treasurer was kept busy processing the Visa & Mastercards on the spot through our EFTPOS (electronic Point of Sale) machine, as well as Robert unlocking and relocking each display case, sale by sale.

This wonderful and diverse display of handcrafted wearable sculptures and paintings continues at Fitzroy Library till 29 June, then on 30 June, the diligent team of “hangers” returns to carefully take down, pack up and prepare the works for their next destination, Toorak – South Yarra Library, from 3 July to 29 August.

Our many thanks go to the libraries and library staff, the diligent “hangers”, Robert the coordinator and photographer, Kathe the Treasurer, and all who have worked tirelessly to put the show on the road – and of course the artists themselves, for without their creations, we would not have a show!

Images of all works are now on our website.