A selection of recent works by CAS Inc. Members

When viewing this group exhibition of 25 works in various media I was struck by how many of them suggested or invited movement in one form or another.

In the work In the Canopy - Heat Rising by Deirdre Edwards, the movement of heat in a tropical setting is portrayed by the depiction of tropical foliage and the subtle use of orange in the print. Then again the tropical heat may result in stillness - the mid-afternoon lethargy when it is too darn hot to do anything.

Float by Cheryle Bannon has, as its title says, a feeling of floating. In a dreamlike scene a female figure is surrounded by drifts of flowers and stars. In Graham Edwards' Offering there is a flood of, I assume, tears flowing from the hands that the figure holds to its face. There is a lot of activity in The Lorne Aboriginal Elder by Owen Brown, both in the physical and spiritual worlds. The expressive lines in Liberation by Rosemary Mangiamele flow upward and outward like escaping birds. But they are still grounded by the greeny-blue colours - liberated birds that have somewhere to go. The pale blue spirals in 5 Pentagonal Spirals by Monika Poray move out to the edge or in to the centre, depending on how you like to look at it. The two female 1920's "flappers" in Les Jeunes Femmes by Li Zhou are poised in a moment as one helps the other to get down off a car. It looks like a still from a black and white film. What were they doing before? What will they do next? 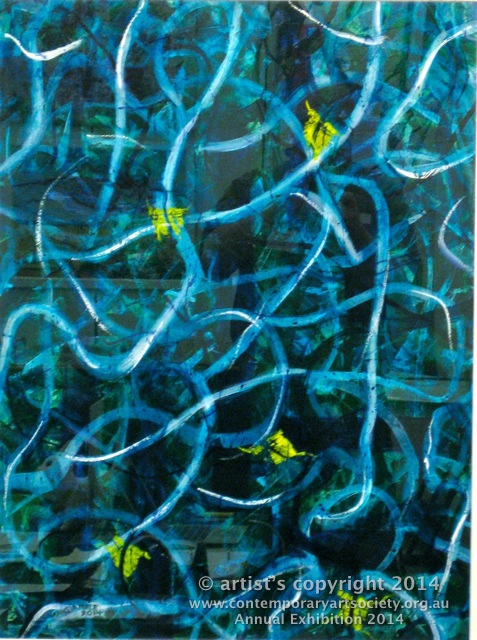 Both the works by William Goodwin are on the verge of movement. Road Tuscany shows a Tuscan scene which I felt like moving into. To stroll along the road, feel the strong sun and taste the dark shadows. Odalisque shows a full-figured female form, in a lively striped dress, reclining on a couch. Her face is not visible but I feel that she is about to move - to giggle and wriggle, then to find her shoes and go water the garden.

In Jubilation - Exultation, June Stable has pieced together 2 figures from snippets of water-coloured paper. They are captured in action. Some game or joke has animated them. In June's other work, The Falconer, there is a moment of stillness - either the bird has just arrived back or is about to be lifted up to fly off. A pause in an on-going drama.

In contrast there are also works that have an inherent stillness to them. I Wanna Be a Cowboy by James Ford is a clever photo of 2 bundles of, I think, cloth that have created a shadow of a child-like cowboy. Michele Leerveld's two pieces, Enchanted and Winning, have a glowing serenity to them. The layers in Perennial Form by Nathan Paramanathan made me think of geological strata that stretch back through time to before human thought. And Vase and Flowers by Johannes van Voorst depicts the dignity of a floral display. But nothing is forever still. A shadow is ephemeral. A glow may be dulled over time. The strata will rise and become exposed and erode. Those flowers will wither and die and move on to elsewhere. So, in the end, everything is movement. Everything changes.