Suzanne Kaldor's art is both figurative and representational. Suzanne chooses 'appropriate media and style' to express her impressions of the world around her. Suzanne has been involved in Art for the last 30 years, she had studied ceramics, drafting and Fine Art. She has won several prizes and special mentions.

On the library wall are displayed Suzanne's works in water colour, pencils and conté as well as her ceramics.

Seagulls in Flight are ceramic birds with yellow beaks and white feathers. They seem to be in full flight, perhaps looking for a place to land or searching for a meal. 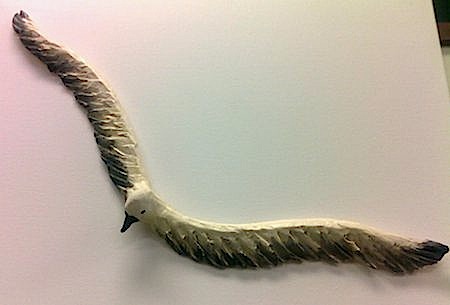 Emperor Penguins is a linocut in black and white with three adult penguins looking very serious and two baby ones just finding their 'sea legs.' There are black hills in the background and white waves on the sea.

Next come paintings of pelicans in water colour, pencil and conté using a limited palette of white, greys, black and yellow ochre … Pelican 1 has spiky hills in the distance, an overhanging branch and in the sky an image, delicately painted of a wise old pelican, perhaps the spirit of their ancestors, watching over them. A group of pelicans drawn with clean, sparse lines lines look as if they were conversing, may have just finished their evening meal. This is a quiet, serene scene.

Pelican 2: much darker here with an air of disquiet, some birds seem watchful and some not sure of themselves. They are amongst parched, dried out tree trunks. Maybe there is a drought.

Pelican 3: a group of pelicans on a sandy sea shore, one swimming in the sea and another flying towards the shore. To me these pelicans look rather quizzical, as if searching for something.

The interesting thing about these creatures is that each seems to have a personality of its own. Some look like wise old things, some assured, others seem shy.

I am sure Suzanne has a love for these creatures, has spent a lot of time observing them, getting to know them and then expressing what she feels in different media.

The glass cabinet: here are delightful ceramics of monkeys, with one of them (Monkey Contemplating), glasses on, contemplating on her surroundings and concentrating on the book she is looking at.

The Baby Monkeys, like all babies, are doing 'their own things.'

Fairy Penguins on the March (Fairy Penguin Parade) are poised on a slippery, icy, silver white surface. Maybe it's Antarctica? One has a brown belly, looks like the youngest and almost sliding off the ice. This looks like a happy scene and Suzanne has captured the playfulness of penguins very well.

The Lazy Cats stretch out luxuriously as only cats can do, relaxed with not a care in the world.

Two Frogs and Tadpoles: Two green frogs with huge inquisitive eyes sitting on lily pads, just 'being there.' On another lily pad, Suzanne has placed a whole frog life cycle. Tadpoles swimming around and a bounty of eggs waiting 'to become.' Suzanne seems to love nature and this well described frog colony is a good example of her interest and powers of observation. I wonder if Suzanne is a person who likes to spend her time outdoors, among living creatures. her works certainly look as if she might.