30 Years On - paintings, prints and sketches

During the last week I visited the Richmond Library to see the present exhibition of work. The artist exhibiting at the moment is George Eustice.

The first part of the work is in the foyer showcase and it displays different types of art that George has worked with. First there is a linocut, a strong image of a man's head which has not only the positive image of the print, but also the actual linocut from which it was taken. Likewise in the case of a lovely small etching. A simple image of a familiar object (a hand basin), of which the metal etching plate is on display. It was a great idea to also have the tools there. It helps the viewer to understand the process by which art prints are produced.

In the case are also two small paintings, one on masonite and one on canvas. Both of these works were in a theme of fantasy landscapes. They were accompanied by the delightful little preliminary drawings that were their inspiration.

On the wall of the inner library there were just three paintings. All three are in the form of stylised and abstracted landscape but with very different personalities. These are striking stark images. Landscape 90 is in predominantly russet tones with blues, and forms that suggest industrial type buildings in the foreground. There was a dark rough line transversing the canvas which is quite effective in that, either by accident or design, suggests life and buildings in the far, far distance. 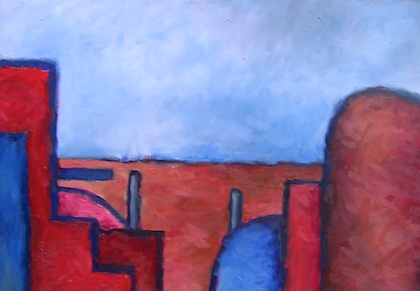 The second work, Landscape 91, has quite a foreboding feeling about it. I really liked the way the paint had been applied, in strong rough strokes. There is a rather apocalyptic feeling about this work. The sky looks threatening and the foreground has the feeling of a town deserted. It is a powerful painting but it is somewhat unsettling. It holds a scary message. 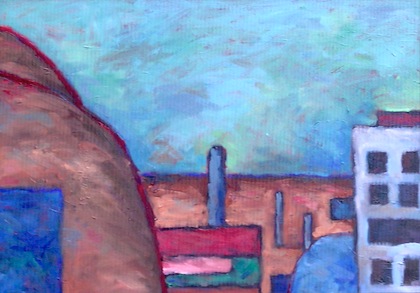 The third painting is Landscape 03. Here we see clearer colours with a light softly clouded sky and very strong foreground shapes outlined in black. It is more minimalist in that the shapes are fewer but very strong and complimentary to each other. Some art teachers scorn the black outline, but I love it. I use it in my own work and say quite confidently, if it is good enough for Roualt, Gaugin and Van Gough, it is good enough for me!

All three of these works were forceful in their simplicity and strengths of shape and colour. I would have liked to see more of them. They have real personality and uniqueness. Good work George!!