Paintings in oils and acrylics

With the title ‘Going To Town’, Carol Rowlands has explored many aspects of a town in her 30 paintings in oil or acrylic on canvas, currently being exhibited at the Fitzroy Library. The colourful exhibition on the walls, and in the glass cabinets, consists of works ranging in size from 120 x 100 cm to a series of small works 10 x 10 cm.

Carol’s CV shows she has had an extensive art education at various tertiary institutions and exhibition experience in solo and group shows. She has also won a number of awards.

A common theme in many of the works appeared to be cramped cities, so crowded that in some the buildings had overcome the natural landscape. For example, Landscape with Cows has many buildings with 3 tiny cows perched on one. And others, such as Ring Road, Townscape and Cityscape, were mostly buildings with a little sky, or a road. The structures depicted included office blocks, village cottages, the ubiquitous Golden Arches, some sort of cooling towers, a church or chapel and townhouses. Signs again used the symbol of the Golden Arches with many road signs – perhaps to stop us getting to McDonald's, or to restrict us into ending up there? 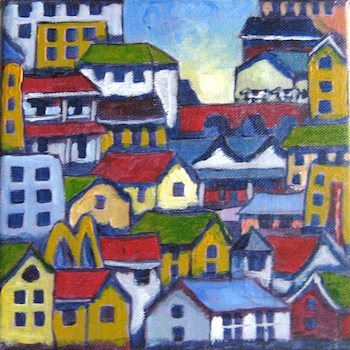 In contrast some works depicted boats on the water (eg. Going Away, Sea Breeze and Freedom) with the titles suggesting an escape, and some fresh non-city air. And other works, such as Maribyrnong River and Terrace showed scenes painted in a more traditional style.

The colours used in the works were mostly from a rich palette, with the cool and warm colours well-balanced and showing creative use of complementary colours. A few works showed a different colour range, such as Gossip in pastel colours, and had lots of ‘gossipy’ buildings leaning against each other. Signs was in mostly earth colours. The sides of the canvases were also painted on, giving some of the works a feeling of three dimensional buildings. 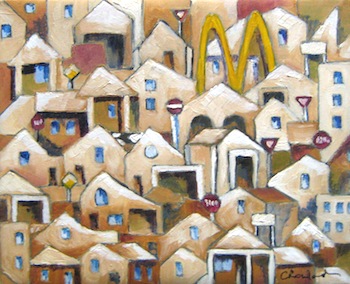 Chickens in the Garden was highly creative, and provided the viewer with some intrigue and scope for individual interpretation - is that a statue or a person? Why are there chickens in the garden?