In writing about her work, Monika said, “There is more to life than being stuck in one mode of production.” Her exhibition of 15 works showed four distinct approaches to the act of creating an artwork.

Dignity, Festiva and Grace, three Pantone  ink and calligraphy pen drawings, were from a series which celebrated “women’s abilities, beauty, assets, pleasant appearance, appeal and whatever other positive attributes one can think of.” Finely drawn and brightly coloured, these whimsical females’ voluminous skirts were formed with patterns and odd assortments of objects. In a similar swirly, decorative style, Bubbles, Play and Calourama expressed the Joy of life. In sharp contrast, the blossoms and leaves on the Princess Gum, one of Monika’s favourite trees, was delicately painted in acrylics with almost botanical study precision. 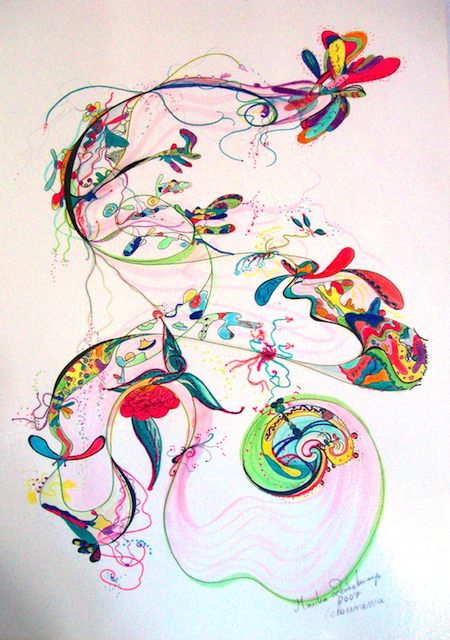 Echidna Chasm showed a different approach again, in this dramatic view of natural rock formation in the Kimberley Bungle Bungles. In a more painterly and earthy style than Princess Gum, the high cliff face was split down the centre by a narrow chasm, with a tiny tree on top to emphasise its magnitude.

In several more abstract paintings, Monika let the colours run and flow to form images. Tranquility was from a series of works inspired by her many aeroplane flights across the ocean and coasts of Australia. She wrote, “There are many places that are untouched by humans. They are pure in their existence. They ooze calm, silence, harmony, serenity, in short, utter tranquility.” In this work the yellow and red land mass stood out against the deep blue waters. Of Ocean Silhouette 1, she wrote, “Floating over the ocean and coastline I see the drama of currents and sand formations, patterns that change continuously under the influence of the climatic conditions, toughening, hardening, eroding and creating new patterns.” Here, the land mass was shifting and changing, the waters churning.

I enjoyed Monika’s sense of fun and whimsy as well as her more serious side and the various ways in which she approached her subjects.