Taking the train to Geelong, it was a smooth and pleasant trip, and amid animated conversations, the hour just flew by. Being Remembrance Day, from the train and during the short walk to Geelong Gallery, we saw several memorial services held in parks. We had coffee in the Geelong Library café, and were pleased to be able to join the RSL service in the nearby park at 11am. Several more members who had driven to Geelong, joined our group and we proceeded to the gallery. 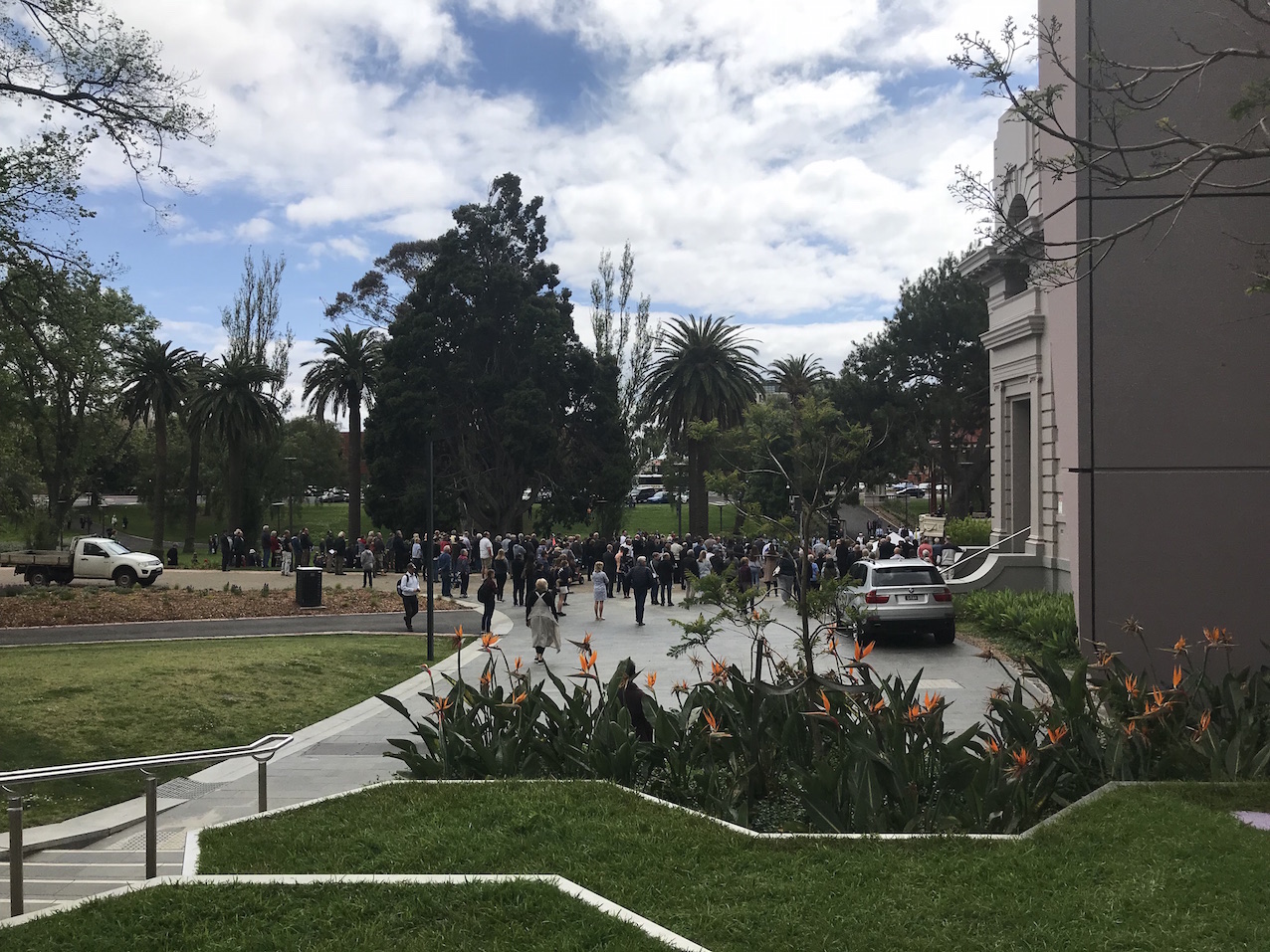 Remembrance Day service in the park behind the library

First awarded in 1921, the Art Gallery of New South Wales’ Archibald Prize has a history of controversy, as well as being a showcase of amazing portraits. This year did not disappoint, with around 60 high quality works, and a prize winner that prompted comments like “why that one and not THAT one?” “THAT one” was Don, the Honourable Don Harwin, NSW Minister for Resources, by Mirra Whale, a huge and very impressive super real work, staring the observer down. Whereas the subject of the winning Self Portrait After George Lambert by Yvette Coppersmith posed quietly with pursed lips, beautifully coloured and painted. I heard someone else said “Everyone's a critic.” 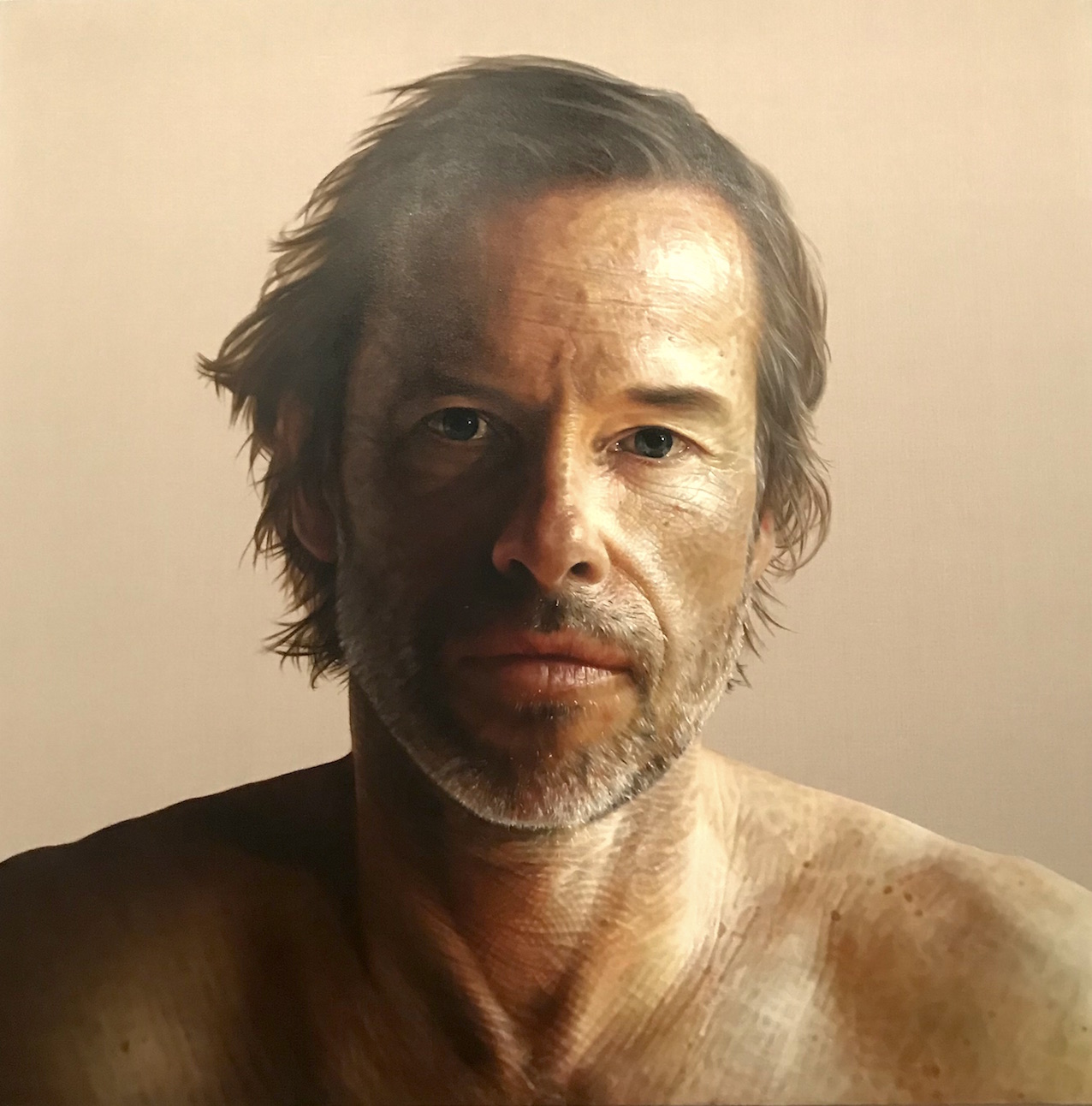 Self Portrait After George Lambert, oil & acrylic on linen, by Yvette Coppersmith 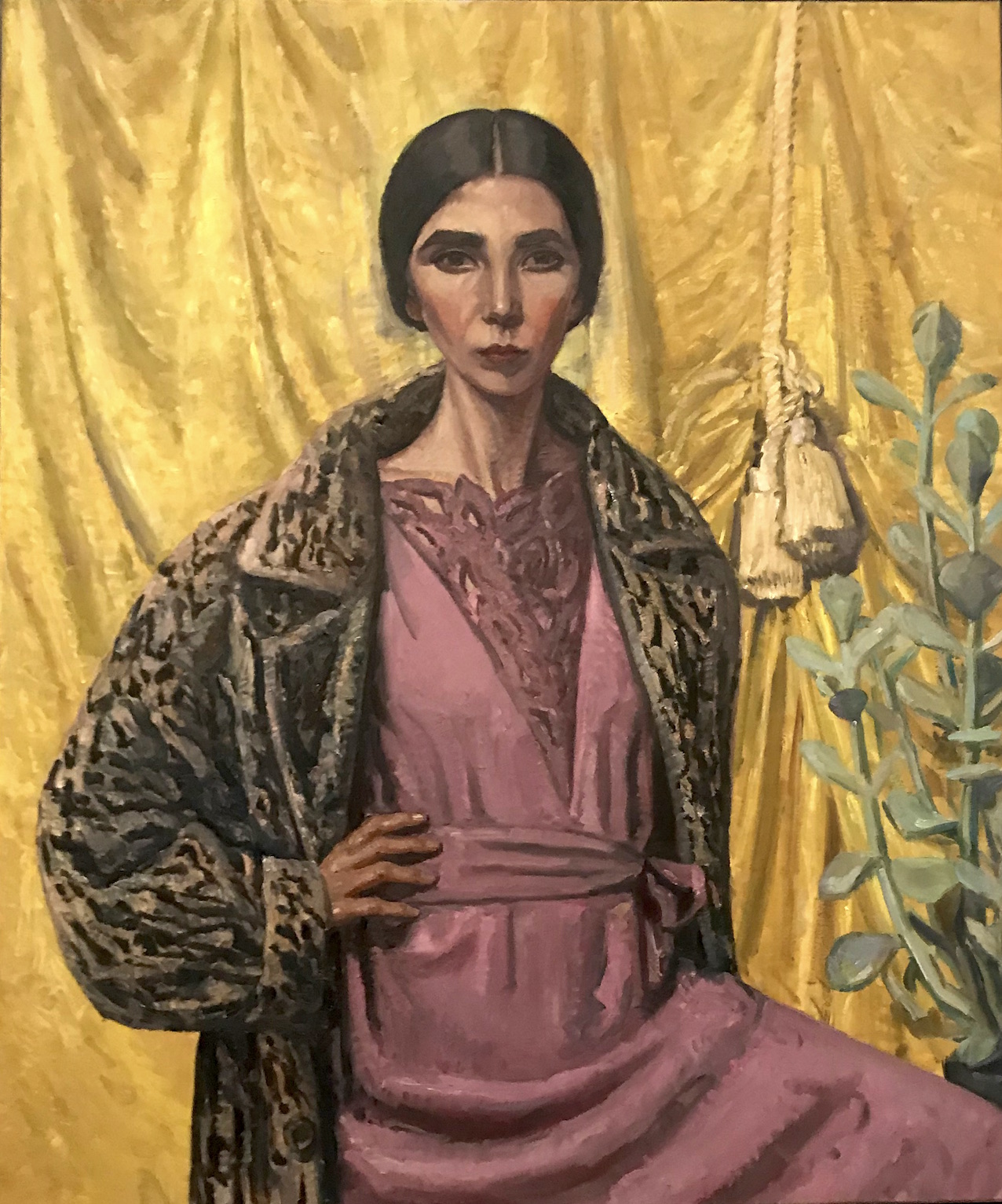 There was a good mix of subject people - well known, unknown, and selfies. Here are some that particularly struck me (in no particular order except as I came to them).

Nicholas Harding painted Treatment, Day 49 (Sorbolene Soak) from a selfie, after radiation and chemotherapy. There is pain in his eyes but also resilience in the set of his mouth and his head is held high. Peter Berner's Self Portrait with Hindsight shows remarkable moulding of the face in striking pink, blue and red. An artist and stand-up comedian, he said in his artist's statement, “I've hurt my own feelings so many times, I'm used to it.” 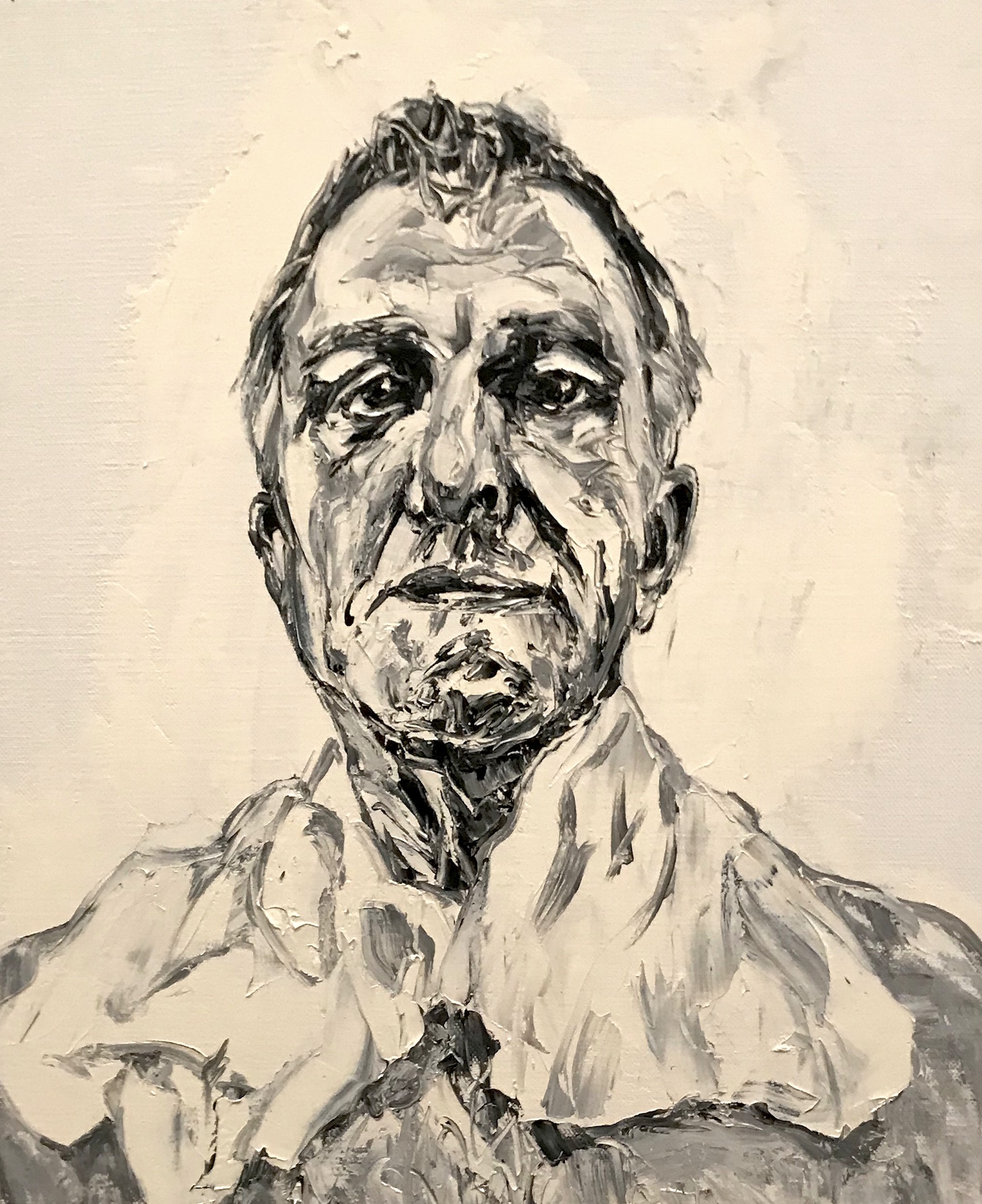 Self Portrait with Hindsight by Peter Berner 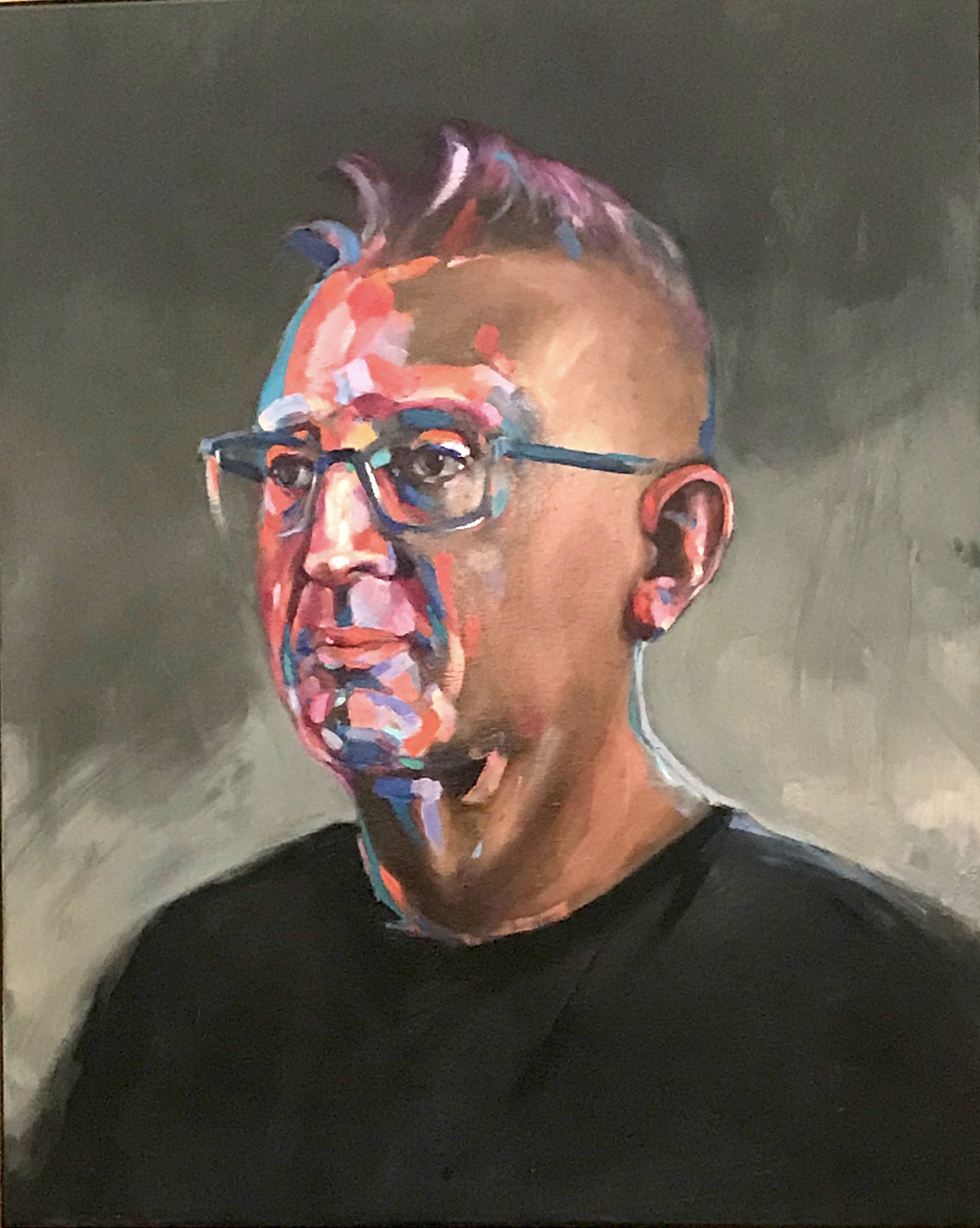 Paul Jackson's Alison Whyte, a mother of the Renaissance, seemed very popular with viewers. The subject, an accomplished actor, sported a beautifully painted Elizabethan lace collar. Someone said “she's pretty”, someone else said “it's a bit contrived”, and I thought of that earlier comment. The Huxleys, painted by Sally Ross, had a beautiful starkness and simplicity of dress with detailed faces and hands. Visual and performing artists Garret and Will Huxley (twins?), both wore neat pink dresses and “Pharoah style” black bobbed hair. 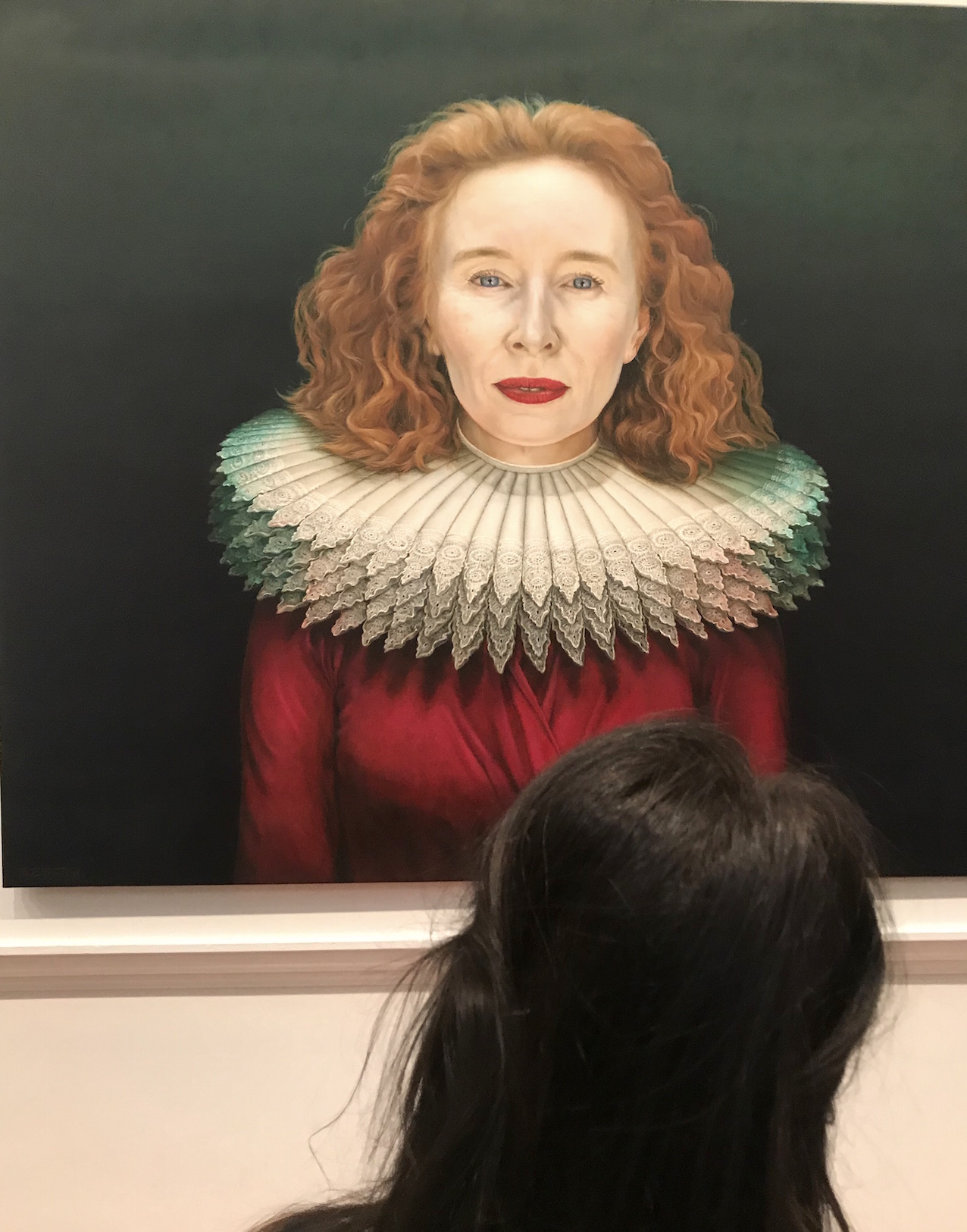 Alison Whyte, a mother of the Renaissance, oil on linen, by Paul Jackson

The Huxleys by Sally Ross 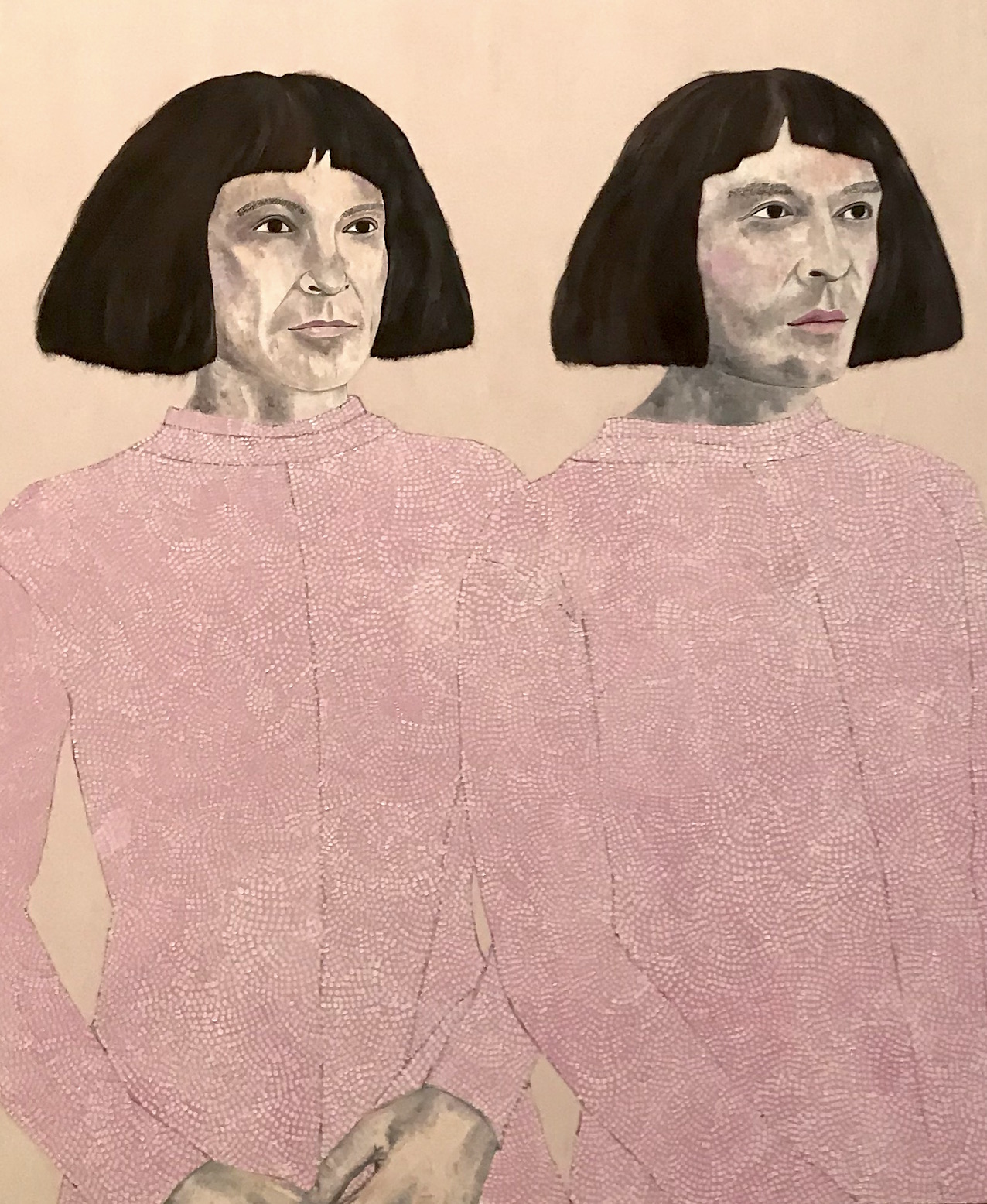 Katheryn Longhurst's Self: past, present and future lovingly depicts her daughetr Maia, but also represents her own past, present and future. In her statement she said, “My daughter represents my future. Her generation will inherit our planet. I am projecting my dreams and hopes onto her; she is part of me but also her own person inheriting the legacy we leave behind.”

In The Serenity of Susan Carland by Andrew Lloyd Greensmith, the subject is a senior lecturer and researcher at Monash University, also acclaimed Islamic leader. Taken from an article in Harper's Bazaar about Dr Carland, he was imnpressed by her work and resolve and sought to portray her in this manner. He said, “… Susan's hijab, so much part of her identity, is integral to ther piece and was a challenge to paint.” 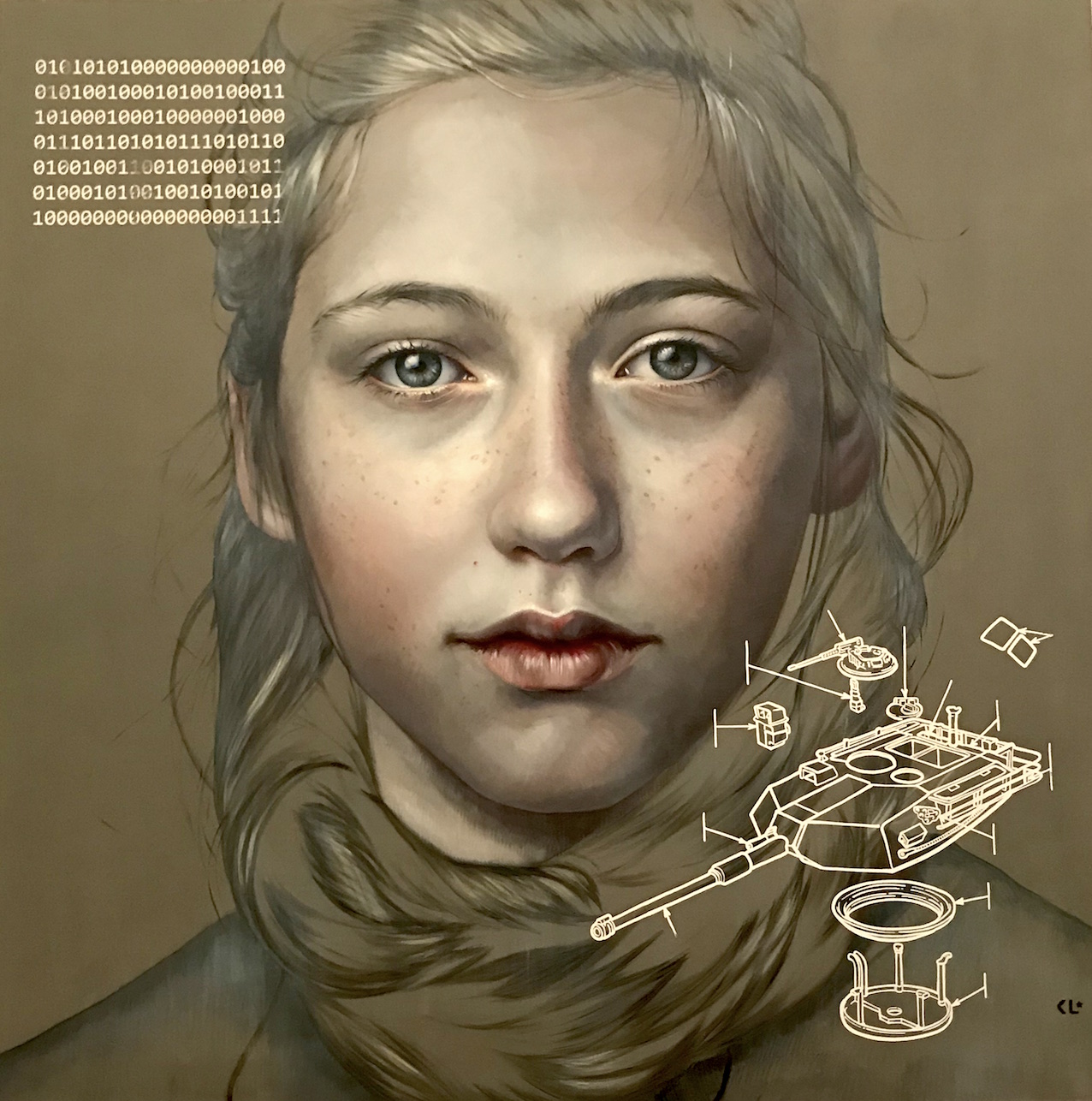 Self: past, present and future by Katheryn Longhurst

The Serenity of Susan Carland by Andrew Lloyd Greensmith 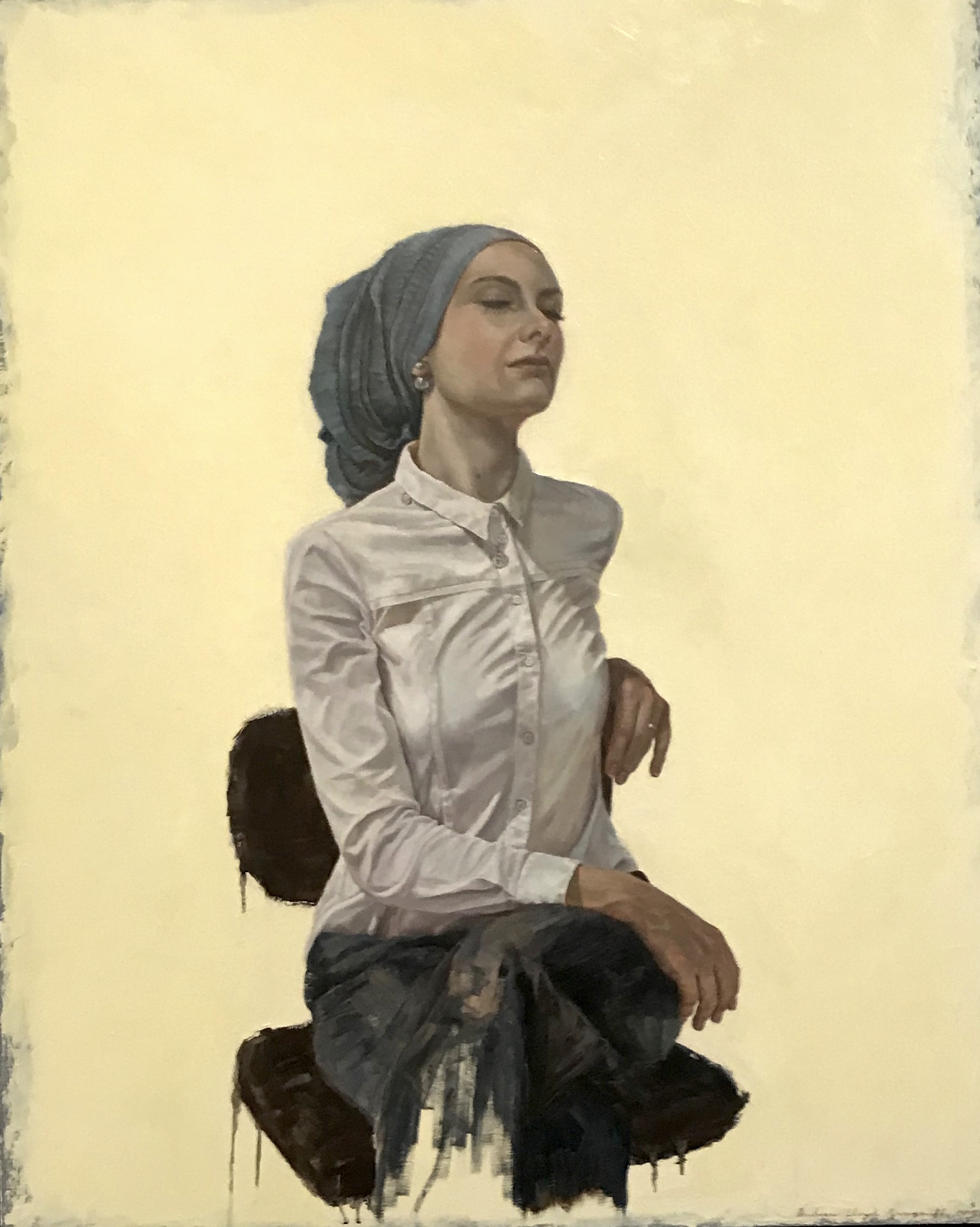 In Dee Smart's Lunch in the outback, her subject Meryl Tankard, dancer, choreographer and director in her cocktail dress, enjoying a vegimite sandwich whilst demonstrating how to deal with flies by putting her knickers on her head. Self-care exhaustion by Amber Boardman showed all the modern woman needs to detox, de-stress and self-care, from green smoothies to yoga and more, as enjoyed by her alter-ego called Jade, who has found that “… trying to relax has become yet another thing she must add to her daily to-do list ….. On a deeper level, it questions consumption, wellness culture and the frantic pace of life.” I loved its humour and satire, but also its deeper meanings. 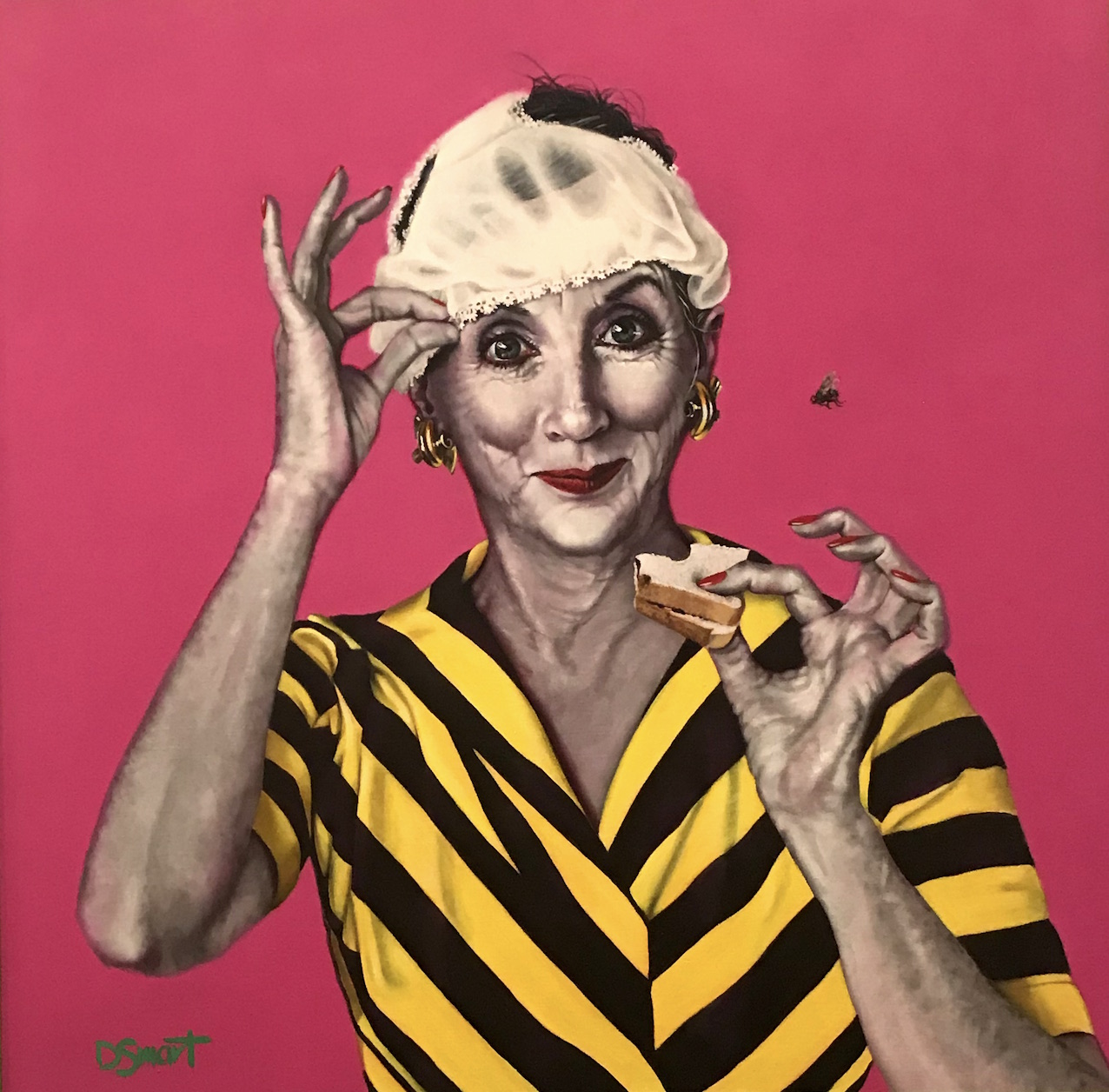 Lunch in the outback by Dee Smart 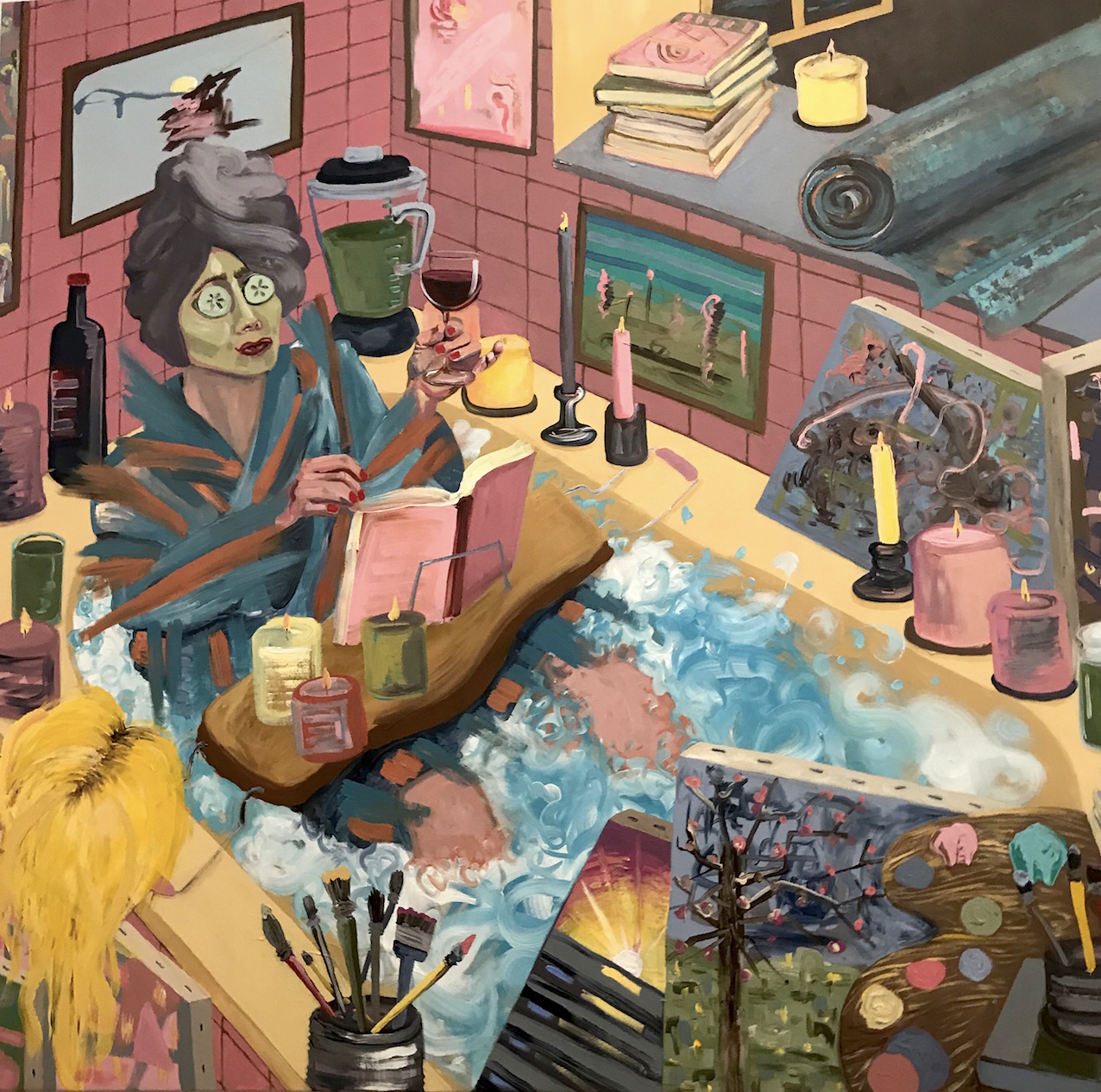 We all enjoyed this year's Archibald Prize, plus other attractions at Geelong Art Gallery, then took a stroll and enjoyed lunch at a local hotel.