Off My Starlight! - a cross-art journey in images and poetry

Gita entitled her exhibition Off My Starlight!, a title which immediately caught my attention by it’s poetic flavour. On the wall of the library, there are four mixed media works on board. In the display case are images, poetry and information on her project of the same title.

In Encrypted, a smaller coloured board with images has been placed on a larger grey/brown one, on which are small drawings and words in pencil, and printed verses.

Heaven depicts a unisex figure, maybe female, maybe male, desperately looking at something dark. The figure is trying to get help to get into something, a broken down house or car. Someone called Gab says: ‘Try pushing’, and that seems to work as the person ends up in the backyard; there is a dog and nothing else. It was difficult for me to read the whole script as some words got hidden by the blue green board with the image. There is a sense of immense sadness and suffering, and this permeates all of Gita's works. Immediately it suggested mental health illness, and old fashioned rough treatment. Words scribbled say: ‘Insulin subcutaneal treatment was still in use, although full coma has been discontinued’. The face looking at us seems confused and frightened. 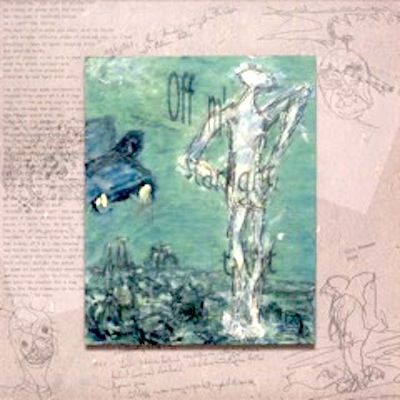 Free has an orange image mounted on the greyish board. There is an outline of a twisted figure, perhaps trying to get free. There is an Australian bush scene with a dog and a person walking. Writing describes treatments again and some words about 'fast train going to'? I could not decipher where. But maybe Melbourne because the printed part tells a story about a tram rattling along Swanston Mall, it’s bell ringing. There is a boy either going to or returning from The Shrine. Reference to some woman, ‘There she is middle aged, gap-toothed beside the daily, weekly, monthly Sun, gay in her printed dress’. And ‘November women prowl the static sky banished from ancestral homes …….. they alight on rooftops’. A large sign says SOS, and again a woman's face sad and confused. 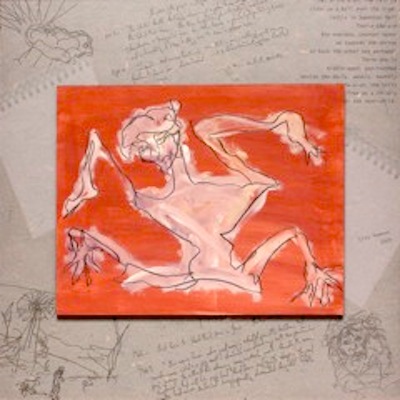 Jude, all black-grey and depressing in 1966 May-June in Sydney, with it’s fast non stop trains. There are some dark midnight blue figures marching, and a large acid green face. The woman is asking who will marry her in her print gown and a rose bouquet, so she can give life to Kev. And she hears a man’s answer that he will, in his ‘best brylcream and …. tattooed wrist’, marry her to save little Kev.

In the glass case, Gita placed her journey to complete her images and poetry project, Off My Starlight, which begun in 2005. This was an experiential response to a Melbourne Mental Health Art Collection. She describes the phases she went through, first having to obtain permission from the Board and Ethics Committee, followed by research, selecting a medium and format. She describes her poetry as a drawn out process of writing, revising and editing. Then there was a trial presentation of what she thought was completed. But it kept niggling her mind, resulting in seeking publication in literary and art journals. ‘Etchings’ publishes ‘Prophet on Flinders’, and RMIT media students make a video for which Gita receives an award and is Highly Commended by CAS in its 2009 Show.

Gita mentions magazines, books, poetry anthologies and group exhibitions which follow. There are pages of poetry with coloured miniatures of her work, and I wish I could read them. I wish Gita all the best with her Project, and others to come.